We love performing at the DHU Strand Theater. We get to experiment, try new material, perform deep album cuts, and kid around with our friends. These shows also help support the musician-owned venue.

This show saw us performing the songs from the albums in chronological order, from the Chicago Transit Authority released in 1969, to Chicago 36-Now, released in 2014. That’s when it hit us just how massive the entire catalog is: Three hours of concert material and we had only scratched the surface!

Several hundred people had The Chicago Authority for lunch as the band took the stage at M&T Plaza in Buffalo. The weather was perfect, the response was great, and the food trucks and other vendors were busy! The band played “just the hits” during the fast-paced 50-minute show.

M&T Bank has been doing these weekday shows every summer for nearly fifty years on the steps of their flagship location at One M&T Plaza.

The Italian Heritage Festival in Buffalo, NY typically draws tens of thousands of people, and The Chicago Authority was honored to be chosen to be the closing-day headliner. Although the threat of rain caused crowds to be somewhat smaller than previous years, the audience responded with incredible energy — especially when they demanded a double encore in the pouring rain!

We were also honored to be joined on stage by our close friend Ken Thomasula, who lent his terrific voice to Brand New Love Affair, Make Me Smile, and Colour My World. Great to have you on stage, Kenny!

Our view of the Dunkirk Harbor from the stage at the end of the pier. Hundreds of people turned out in questionable weather to hear the band, and the storm held off just long enough for us to finish the show. Fifteen minutes after we finished, the sky opened up and a torrential rain soaked the sound crew as they raced to protect their gear from the water.

Thanks to everyone who ignored the weather report to see our show. And this post wouldn’t be complete without a shout-out to our new friends Big Tone, a band from Dunkirk who opened the show. Great originals and tasty covers, guys!

It was one of those hot and humid western New York summer evenings. It was the Wednesday after Independence Day. People had been partying for a long 4-day weekend. We thought the crowd would be sparse.

Boy, were we wrong! The crowd packed the entire area all the way to the next street. Standing room only on the sidewalk across the bridge. And all along the banks of the Tonawanda side of the Erie Canal. We estimated about 4,000 friends and fans came out to end a 5-day weekend. The crowd response was overwhelming!

We originally called our appearance at the River Grill a “Glorified Rehearsal” but it turned into a Glorious Rehearsal when a couple hundred of our friends came to see us! Owners Jim and Patty Clinton have supported live music since they bought the place, and each week there are a minimum of nine bands performing (two on Tuesdays and two on Saturdays).

We thought the stage was going to be too small for our nine-piece band until we heard that a 16-piece big band played a couple nights earlier.

We tried a couple of new (to us) songs, and polished up some others as we played for about 2 and 3/4 hours. We will do this again!

Town of Niagara Supervisor Lee Wallace said it was the biggest crowd ever for the Music Mania Mondays concert series at Veterans’ Park. Everything fell into place to make it one of those perfect (but humid!) western New York summer evenings.

Our friends Eli – A Tribute to Three Dog Night opened the show with a great set of tunes from another hugely popular band. Thanks, guys!

We arrived at the Seneca Queen Theatre in Niagara Falls, Ontario to meet a terrific tech crew who had already worked hard to make sure everything was perfect. The “Springlicious” street festival was happening right outside the theatre’s front door, so we took advantage of the area’s offerings and listened to some great local music while we waited for show time.

When we hit the stage, the audience was ready. The response after the first song set an energy level that we thought couldn’t be bettered, but it increased after every song. This is an audience that loves its music, and it shows! Even our “hard-core-fan” selections such as Poem for the People and Mother were met with excited applause. We left every bit of energy we had on the stage, and by the end of the show we could barely move!

After the show, we got a chance to talk with many of our new friends at the Meet & Greet in the lobby, and it reinforced what we already knew: Our neighbors to the north are some of the friendliest people on earth!

We love the intimacy of the DHU Strand Theater. Our shows there allow us to try new tunes and, more importantly, they let us get to know you personally. Our brother Sal “Phil Donahue” Marino carries a container filled with slips of paper. The name of one song is written on each slip. Sal has you pick a slip of paper, holds the mic while you announce the name of the song, and the band has to play it. He also opens the floor for Q&A.

Aside from one confused person who thought Chicago’s “(I Just Want To Be) Free” was actually “FREEBIRD” (yes, there’s always one!) things went very well.

Thanks to everyone for spending your evening with us, and for being good sports! 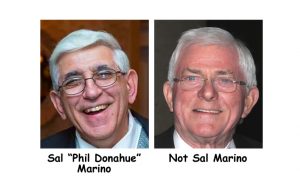 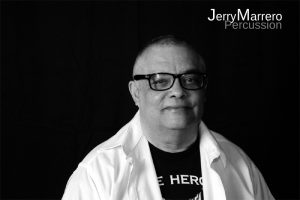 Please say hi to The Chicago Authority’s Percussionist, Jerry Marrero! Originally from Buffalo, NY, Jerry has performed as a touring sideman and recently returned to his home town.

Jerry brings an unmatched level of musicianship and a fresh approach to the “icing on the cake” of The Chicago Authority’s music. Welcome Jerry!